Encrypted Sharing in JavaScript and Go

Important definition in this document.

Read more about what R3 is supposed to defend against in the Threat Model document.

Note that, despite our best efforts, it’s impossible to guarantee perfect security. The code might contain bugs and design issues that make it vulnerable to attacks; if you’re aware of any please contact me.

When a user creates a Share the site generates 4 pairs of 3 random characters picked from a list of 60 alphanumeric entries (i.e.: Il2.exa.mpl.ejR); this is the default Share ID; such Share ID can be modified or regenerated by the user - although the default one gives more than 2e+21 possible entries the user could potentially make it simpler.

The generated Share Hash, Encrypted Share Content, Encryption IV, Key Salt, Expiration Time, and Expiration Views are then sent to the server over a TLS 1.2 or better connection before being stored in a Redis database.

When a user views a link (i.e.: goes to https://rkt.one/#Il2.exa.mpl.ejR), the same process above is done in reverse.

We then generate the Share Key similarly to above but instead of using a randomly generated Key Salt we use the server-provided one and then proceed with the decryption of the Encrypted Share Content using the server-provided Encryption IV and the Share Key we just generated; after using AES-GCM-256 for decryption we perform some basic checks on the Share Content to make sure it confirms to what we expect and prompt the user to request if they trust the Share and the person who sent them the link. After the user accepts the share we will try to securely load the content in the browser.

All the hashing, encryption, and checking mentioned above is performed in-browser client-side. The Share ID, Share Key, or partial hash is never sent to the server. 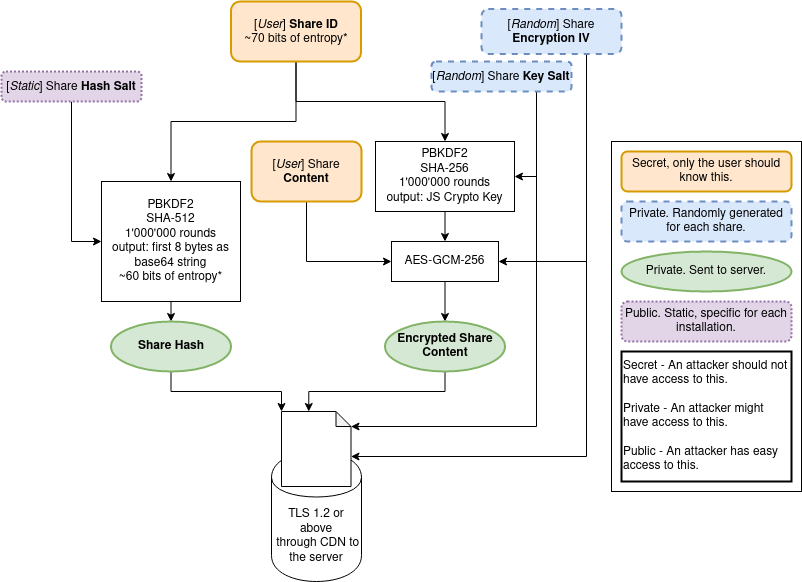